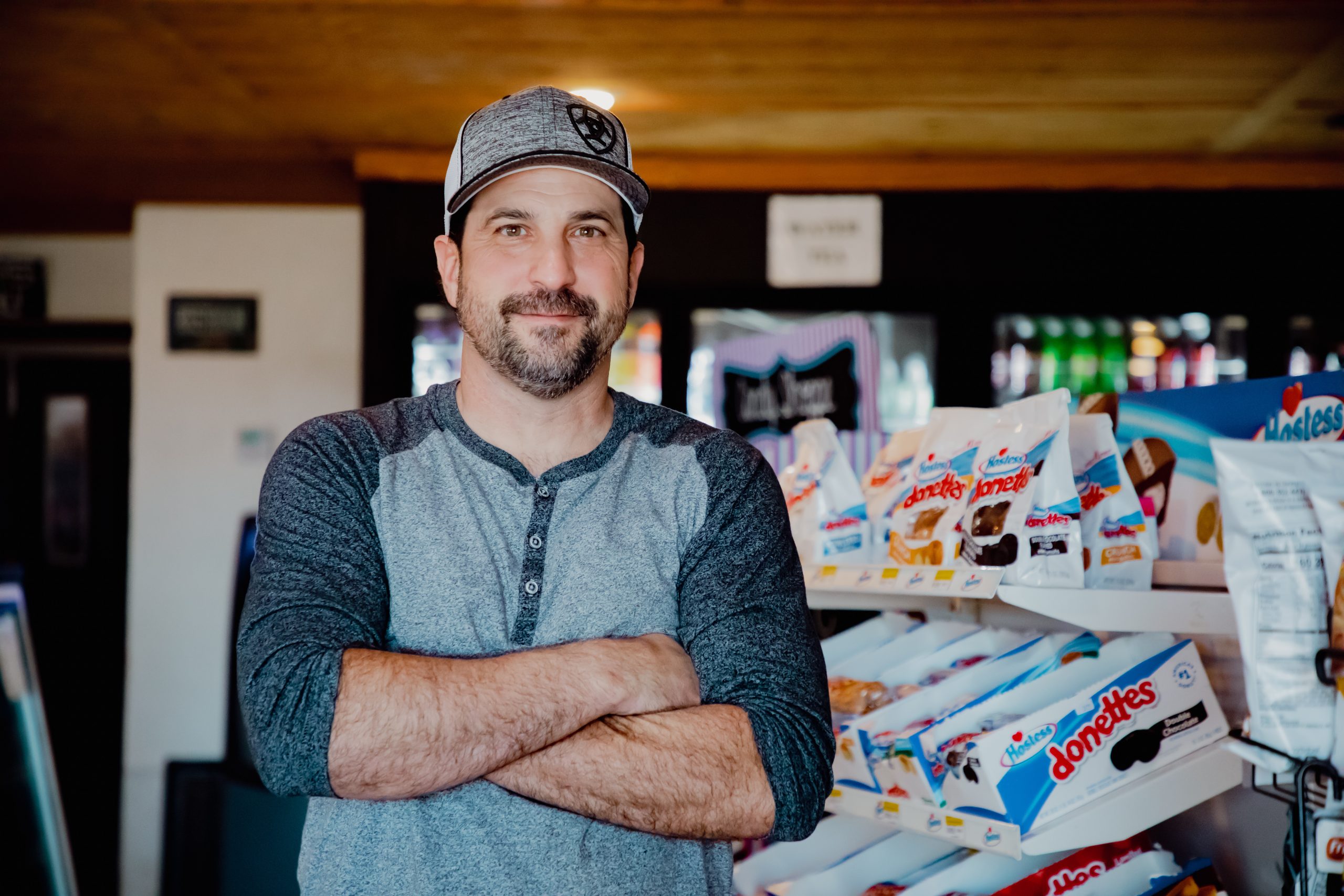 By Barbara JenkinsMarch 15, 2022No Comments

About 4.5 miles west of the Arkansas state line, on highway 83, sits PJ’s Country Store. For the past twenty-six years, PJ’s has remained a staple for the rural community of Monroe, Oklahoma.

As a young man searching for entrepreneurial opportunities, Paul Larosa watched car after car cruise by while sitting on his front porch sipping coffee. Paul saw a demand for a gas station, convenience store, and coffee shop.
Now, 26 years later, PJ’s is a one-stop-shop for the residents of Monroe.

Walking into PJ’s, customers are greeted by the sweet southern smiles of the ladies behind the counter and the smell of Philly Cheesesteaks on the grill. Deep belly laughter from locals drinking coffee at the booths in the back and seeing tin on the walls salvaged from Monroe School District’s former bus shed is all just part of the day-to-day atmosphere of Monroe’s go-to gas station.

“We offer pizza and hamburgers and cheeseburgers and, of course, groceries and anything else someone might need. I like to say we are more than just a convenience store. I really feel like we are really one with the community.”

Paul’s renovated the store over the years in pursuit of keeping the store up-to-date. However, Paul knew that building the store would come at the expense of a lack of resources available to rural communities, especially high-speed internet. For the sake of his family and community’s best interest, he decided those were difficulties he was willing to risk.

The only internet available to PJ’s was incredibly slow. In fact, it was a daily struggle to use their point of sale system to handle inventory because processing the transactions was already nearly more than its capacity.

“On many occasions, we had to just go somewhere and try to send our inventory orders through our cell phones because it was so bad.”

Paul thought that slow internet was the cost he had to pay for his commitment to serving his hometown.

That was until his local cooperative, Arkansas Valley Electric, created a subsidiary, Wave Rural Connect, to provide all their electric cooperative members with high-speed fiber internet.

“Before, it took so long for each credit card transaction to process. Now, with the power of Wave Rural Connect, I can serve my customers more efficiently. People might stand in line to talk at the counter for an extended period of time, no longer because they are waiting for their transaction to complete, but strictly because they are enjoying each other’s company.”

From groceries to gas, the residents of Monroe have a place that supplies their needs, all because of PJ’s Country Store. It’s places like PJ’s and people like Paul that make bringing fiber to rural homes and businesses worth every mile of line.